5. Ramen in the city

Listening to: Pink by Four Tet

Today's entry will be a long one, because I have a lot to talk about. I will talk about the little trips I went on recently with my girlfriend, what I've learned recently about urban city planning, and general thoughts about my native country.

Today is Tuesday! Last Tuesday, my girlfriend and I went to a couple of video game stores near my area. I can't go myself because I don't have a car. I didn't make her take me, she's also into video game shit, more than me actually. I'm not talking Gamestop, I'm talking about cool ass retro video game stores.

I had never been to one before this, so I was pretty excited. I wasn't planning on buying anything specifically, but I was open to the idea of using cash to buy something if I found something I wanted. I ended up not buying anything. Mostly because I only had like forty dollars and when we're talking about the price of retro gaming right now, that's not going to get you much, at least much of quality. :/

Anyway, it was cool and fun just to check out all the stuff. 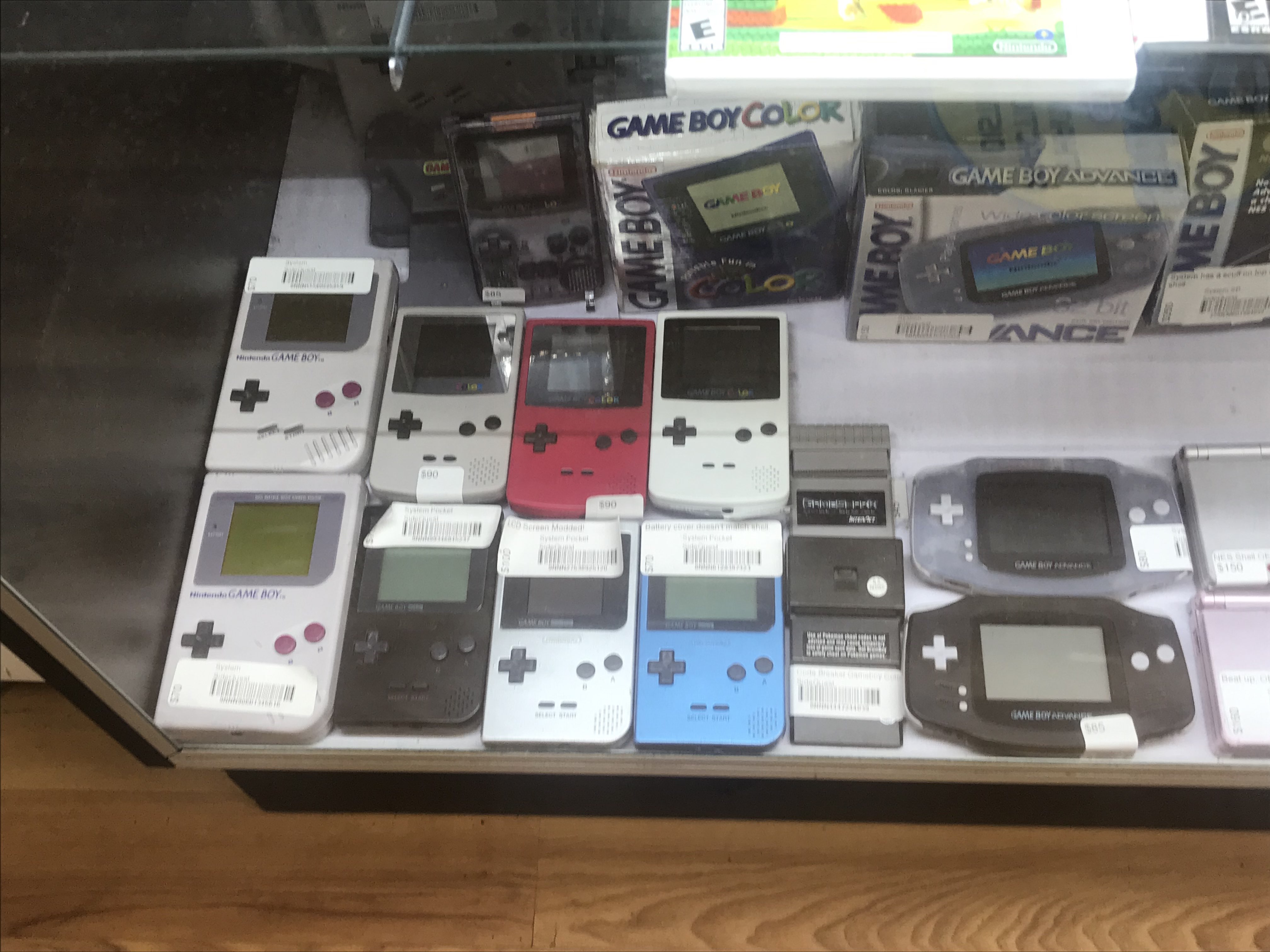 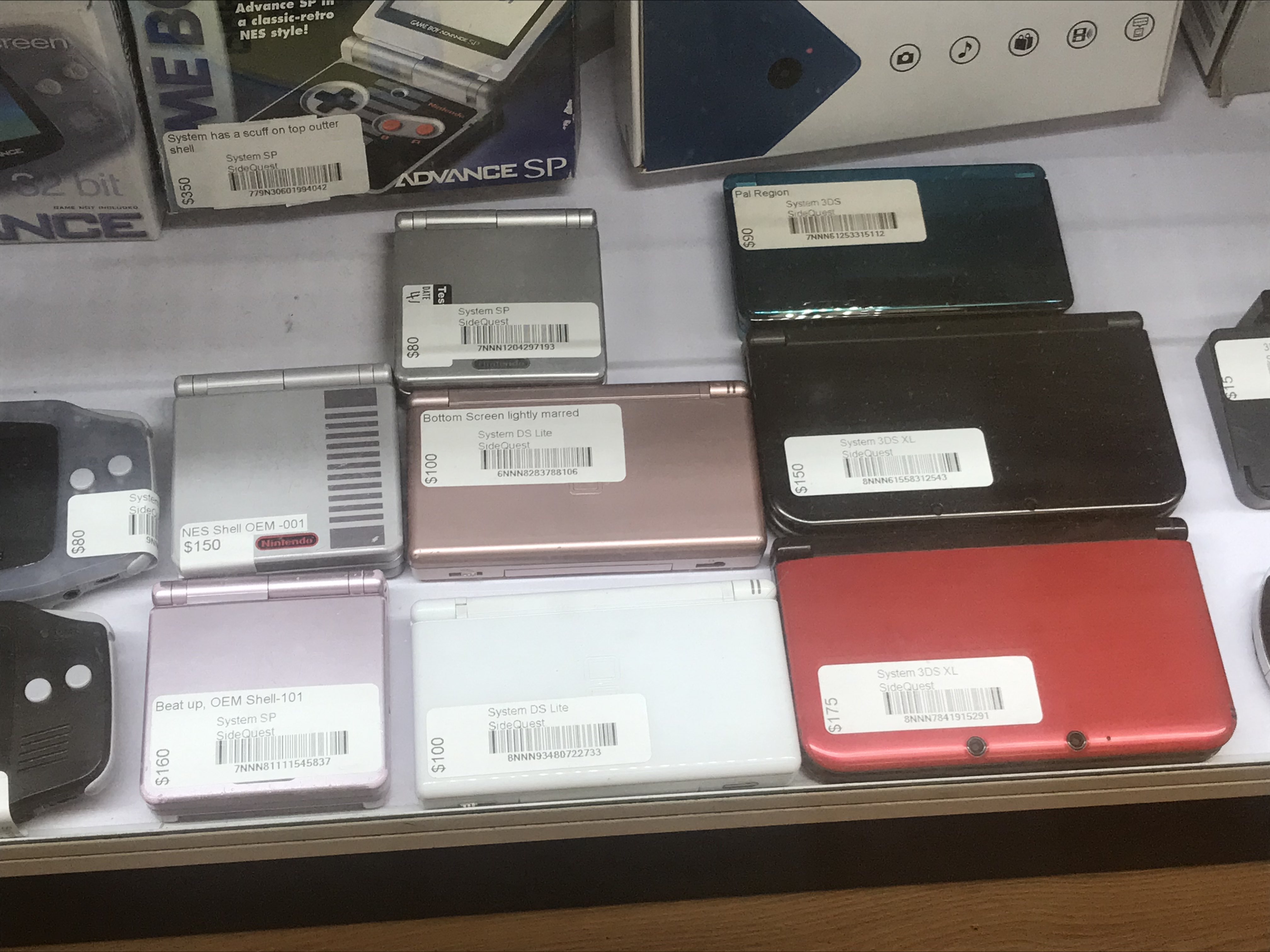 Yes, uh huh, you can see the name of the store on the bar code label things or whatever. Oh no. Someone will see this and extrapolate my exact location and come to kill me. Oh nooooo. I don't fucking care. Whatever.

They had a bunch of awesome consoles!! I love handheld consoles, and it was so cool to see all of these. I didn't think they'd have this many. Of course, I'd love to have a Gameboy Color of my own, but not today.

One of the main things I wanted to see was one of these beautiful machines: 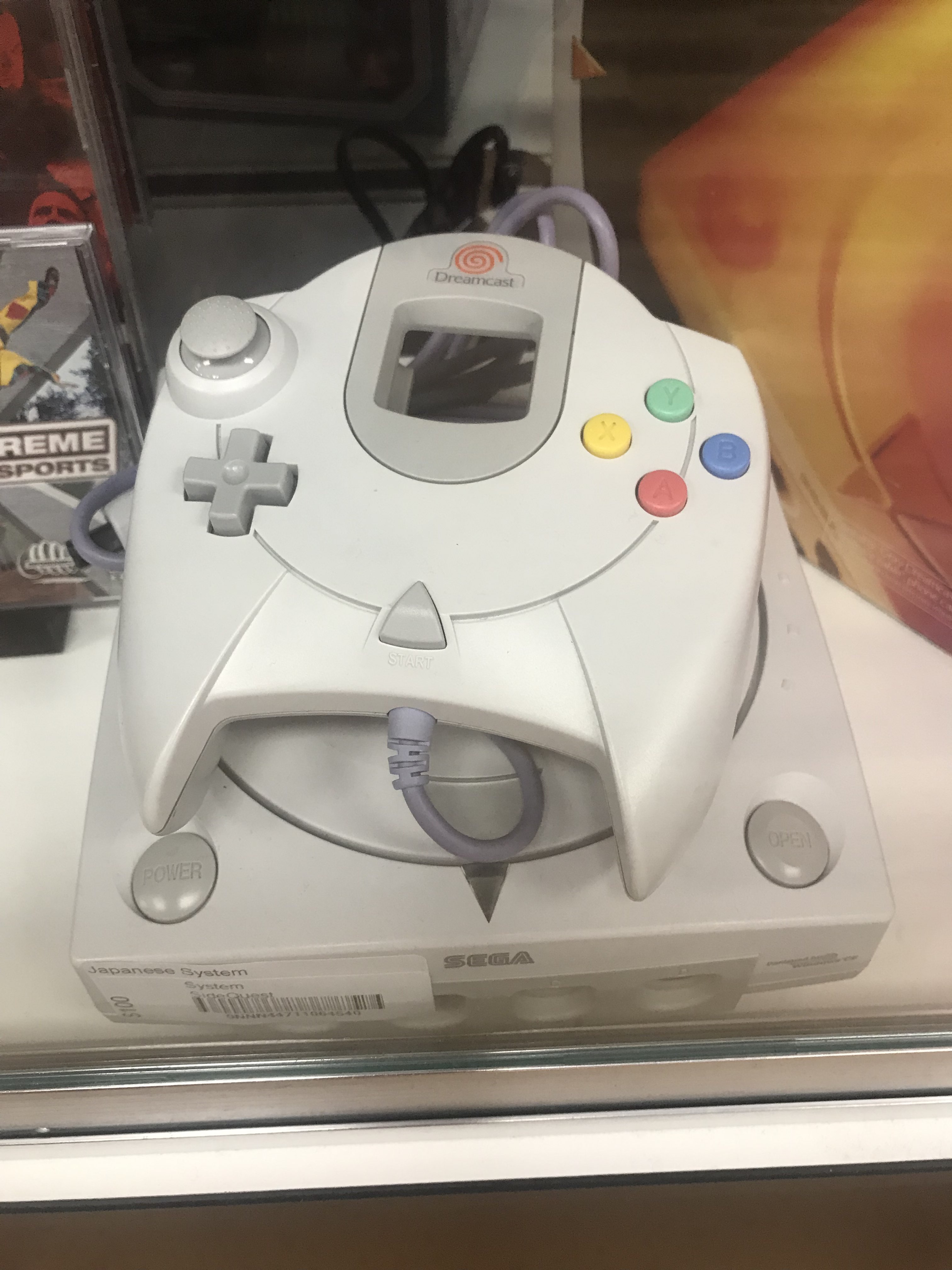 I spent some time at this store just lovingly staring at the Dreamcast. Hopefully I'll have one of those someday as well.

That was the first store. We went to a second one, but they didn't have as much stuff. It was still cool to go.

So that was fun. And then later in the week, my girlfriend brought up the idea of going to some other stores. She was trying to find stores that specialize in goth clothing, but she couldn't find any. I wanted to go to out again anyway, so I found a place to go.

So on Sunday, we went into the city and visited a Japanese bookstore. That place was big! It had tons of manga! It had lots of stationery too. And general Japanese books and figurines and just a bunch of other stuff. It was so GORGEOUSSS

I really liked being there too. Once again, I was open to buying something, but I didn't find anything I wanted super badly, so I ended up not spending. 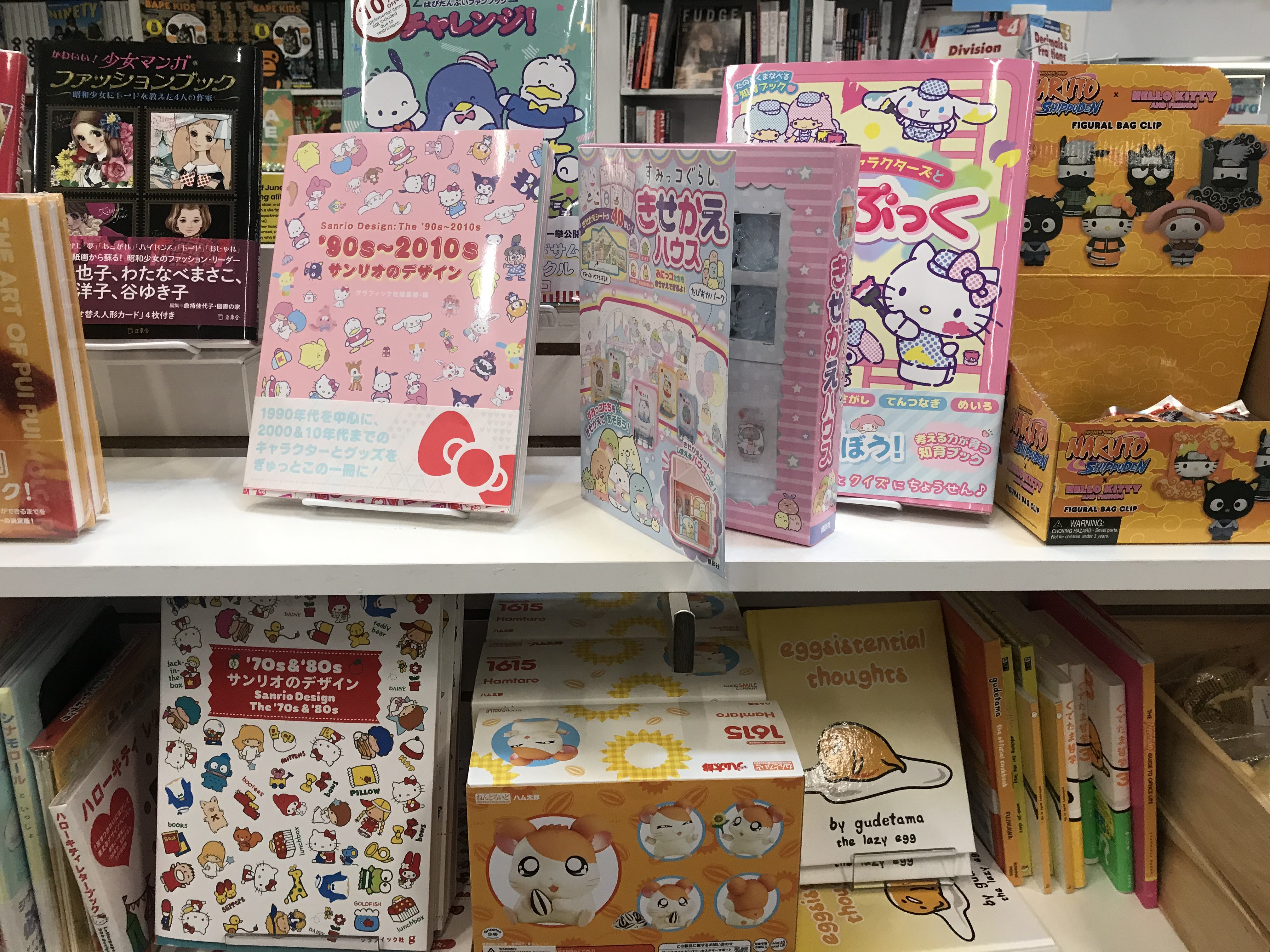 It did have this extremely cute little Sanrio section though. I would have liked to spend money on this.

After that, we went to a nearby ramen restaurant. Never before had I eaten proper ramen. I had always wanted to.

I decided against taking photographs there, so I have nothing to show you, but I will tell you that my meal there was probably my most positive restaurant experience ever.

First of all, the atmosphere. I was greeted with a loud IRASSHAIMASEEEEEEEEE and I know it's dumb but like that was just fucking awesome I swear. It is quite a small place with a handful of tables and a bar, and it felt so cozy to be in. I enjoy the sound of general indistinct chatter.

Second of all, the menu. I tend to think it's better when restaurants have smaller menus of stuff they're fucking good at making, rather than big menus with a bunch of mediocre shit. Quality over quantity and all that. Their menu was so easy to understand and so simple. It made me feel much more comfortable making a choice about what to get. So I just ordered a basic miso ramen.

And third of all, the food. Holy fuuuuccckkkiiinnggg shsshsishihisittttttttt THAT RAMEN WAS SO FUCKING GOOD

It had a slice of pork belly, bean sprouts, green onion, and like a sheet of seaweed. Everything about it was delicious. The broth was so rich. Like you can tell that shit was fresh and cooked with care. It was filled with flavor and when you got a spoonful, you could see so many little ingredients and different colors in there. I don't know how to explain it well. It was the first time I'd ever felt totally satisfied with eating something that was just liquid.

The noodles were great, of course. The bean sprouts were nice and crispy. I love green onion. The pork belly was nice and tender, and it had a bit of fat on it but like. I didn't notice it much and it was nice flavor. I don't like the flavor of seaweed on its own, but with the ramen, it mixed together into this really nice ocean flavor.

The portion size was also quite big. I could have stopped eating partway through and been satisfied, but fuck me, I was not about to leave that place without downing the whole bowl. So I ate it all. I'm glad I did.

We went into the city to do this. Like, the downtown area. I never get to go into the city. I really enjoyed the experience for the short time I was there.

Let me tell you a little bit about where I live. I live in my own apartment. It is right next to a highway. That means constant car noise. There's also no one walking around out there. And to go to the intersection that is RIGHT NEXT TO ME, there is no sidewalk. One reason I moved here is because the grocery store is a five minute walk away. I can't even make that short of a walk without experiencing the lack of a sidewalk. So I have to walk right next to all the cars.

Recently, I've been learning quite a bit about US and Canadian infrastructure and cities. And why they're utter shit. If you want to learn about it, go watch the great channel Not Just Bikes, because that's what I've been watching. I won't explain everything I've learned, but here is what I've come away with: I hate cars. Public transport rules. And I love, love the idea of cozy, walkable streets. You hardly fucking find that in this country.

When I moved into here, I wasn't too bothered by the idea of being next to the highway. Sure, there would be cars, but I'd get used to it. I was used to it for a while. But more and more and more, it's started to affect my sanity. And around here, there are no nice places to walk. No nice places to hang out. I spend the vast majority of time inside of my apartment because I hate what the outside looks like, and that's . . . just sad.

Getting out of this shit suburban area or whatever you'd call it and into the city was totally different, and I appreciated the trip more than ever before. Because I've been there before, but I'd never been that happy to be there. It's because living where I do has made me feel worse and worse about my area. I do not like living here.

So, I have decided that I liked that experience so much that I am going to use what little cash I have to take a bus back into the city and eat at that ramen place again. I don't take the bus anywhere ever because it costs money. I've only used it once before and it's because I was desperate.

Now let's talk about how much I fucking hate the United States.

This country is a joke. By the day, I'm more sickened by the idea of living here, and Europe looks more and more attractive to me.

REASONS I HATE THIS PLACE

This list is my random personal thoughts in a diary entry on a website. Please do not take me that seriously. I am not very educated on any of these things.

And honestly, it's just too fucking warm where I live. I like it much colder. And darker. Eternal night in winter up into the Arctic sounds beautiful to me. Hopefully I'll get out of here someday and move someplace I'll be happier. I have a lot of figuring out my life things to do.

If you are still somehow for some reason reading this, thank you, damn. I've been at my computer typing for one and a half hours. Have a beautiful night, fellow human.